UNLIKE any other candidate, the voters know what to expect if they elect Gov. Michael S. Dukakis as their next president. Dukakis is the only Democrat in the race who has a proven track record of success, and he has also demonstrated the personal qualities of honesty, candor, and integrity that set him apart from his competitors.

Dukakis is the only candidate who has run a government. Sen. Paul Simon, Rep. Richard Gephardt, and Sen. Albert Gore ’69 have built their careers on Capitol Hill, while Jesse Jackson has never held elected office. Dukakis is the only one who has balanced a budget, formulated a legislative program, led a cabinet, and acted as an executive. He has learned the need for compromise and agreement, which will serve him well in Washington. He has drawn his experience from the act of governing, not sitting in a comfortable Washington office building worrying about PACs and interest groups.

Dukakis’ record as governor of Massachusetts illustrates a record of tangible achievement, rather than the theoretical–and at times fanciful–plans of his competitors. Fiscal prudence and compassionate, practical social programs have become the Dukakis trademark. Massachusetts has led the nation in its workfare programs, its housing and education initiatives, and in its insurance and health legislation.

And the governor is the only candidate who can make good on his promises for economic success. Under the Dukakis administration, the state became known as the “Massachusetts miracle” for its booming economic growth–employment hovers around 2 percent, three points below the national average. Dukakis has implemented policies which have fostered innovation and growth, while he has personally encouraged the partnerships between industry, government, and universities that have made Massachusetts one of the nation’s high-tech, export centers. Dukakis can rightfully claim some credit for transforming a state once called “Taxachusetts”–beset with high unemployment, crime, and a declining economy–into the nation’s top economic success.

UNLIKE Reagan, Dukakis’ management style displays a “hands-on” philosophy. The recent shake-ups in the Dukakis campaign hierarchy, in which Dukakis fired two of his most trusted advisors for unethical practices, show that for him, the ends do not justify the means. This is a refreshing and attractive attitude after eight years of the most scandal-ridden administration in history, presided over by a man who neither knows nor cares what his subordinates do in his name.

But Dukakis is not only running as governor of Massachusetts, but as a man who can apply his knowledge and expertise to national problems–such as trade, foreign affairs, and the environment. Dukakis rightly places himself against Gephardt’s call for sweeping protectionist legislation and instead calls for national attention on rehabilitating our weaker industries. Dukakis considers the best policies to be limited protection of only the most hard-hit industries–such as oil and textiles–only so long as to allow them time to catch up with existing technologies.

The governor’s vision comes through in his plan for a national energy program, which would help reduce our dependence on foreign energy production. This includes tax breaks for Texas oil producers and development of alternate energy supplies. This would decrease our dependence on nuclear energy, which Dukakis has fought in his battle against the Seabrook nuclear plant.

Dukakis has moved to develop a coherent foreign policy, one that recognizes that America can no longer dictate to the rest of the world. President Dukakis would use both negotiation and a newly-revamped and efficient military to live in a multipolar, not a bipolar, world. Perhaps what we need now is a president who can bring intelligence and good sense to foreign policy, not a strict ideology as a “hawk” or a “dove.” Dukakis would be an “owl.”

DUKAKIS has proved himself a “man of the people.” He rides to the office on the T and he buys his suits from Filene’s basement. Dukakis, in fact, has better proven himself to be “one of us” in the South than has Gore, whose Washington upbringing, prep school/Harvard ties and liberal voting record are taken as evidence that he has betrayed the South.

Dukakis has an excellent reputation for honesty and straight-forwardness, qualities which have deflected much of the moral criticism that has plagued the other candidates. America’s love for these virtues, which Reagan captialized on in his campaigns, shows the importance they hold for voters.

On many issues Dukakis shows fundamental disagreement with other candidates and he emerges with more of a discernable identity than others. He repudiates Gore’s militaristic foreign policy, Simon’s ludicrous public works-balanced budget proposals, and Jackson’s unfeasible visions.

Michael Dukakis is the man among all the presidential contenders who has consistently shown his desire to address the needs of all Americans. His record has not favored the rich or the poor, but has treated all fairly with an aim toward social justice and sensitivity from the government. His record as a chief executive and his inherent integrity show that he is the man who can succeed in this effort. We support him for the Democratic Presidential nomination. 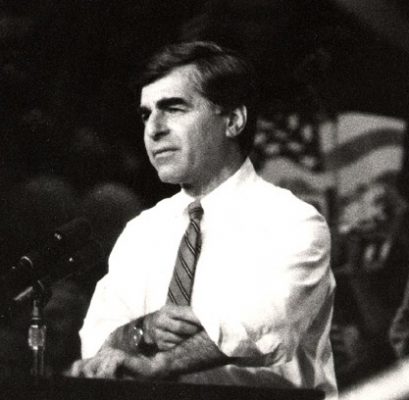